Snow has hit Southern England again. Diane was out at 11am clearing the drive of snow that fell between 6am and 9am. I went out with her but collapsed breathless after 10 minutes. 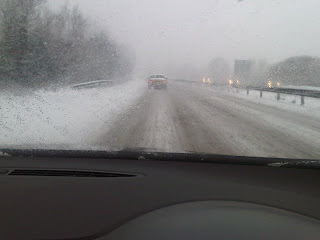 Alas, my son David was unable to join us for the weekend. After driving in blizzard conditions for 3 hours he had to abandon hope and return home. The picture shows my Jaguar battling through the snow. The picture was taken by his girlfriend who was driving his car in tandem.

We have had a beautiful sunny day and most of the snow has melted, but the route from Oxford to Bournemouth was impassable.
Posted by Terry Hamblin at 5:48 pm

Email ThisBlogThis!Share to TwitterShare to FacebookShare to Pinterest
Labels: weather

Sorry David had to turn around after three hours of fighting the snowny driving conditions.Glad he is safe though and I'm thankful you have Diane.You need to stay in where it is warm and dry.
Have A Blessed Christmas Dr. Terry and thanks so,so much for all you do for us.
Have a Healthy Happy New Year in 2011!
God Bless,
Deb Light
www.cllcfriends.com