Why am I not better after a transfusion? 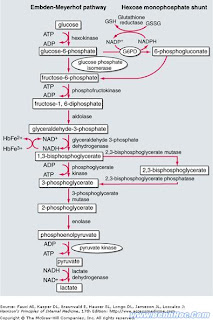 I have been asked about why blood transfusions do not make you feel better immediately. The answer lies in the Rapoport-Luebering Shuttle. For those who would like to read the long-winded textbook explanation try this link but for others, here is an explanation.

The main purpose of red cells is to take oxygen from the lungs and deliver it to the tissues. For this purpose they contain hemoglobin. Hemoglobin has a high affinity for oxygen, but at some stage it has to let go of its oxygen so that it can be taken up by the tissues. How it does this is complicated but it is very dependent on the acidity of the tissues, but also on the concentration of a molecule called 2,3-DPG.

The other important factor affecting the oxygen affinity of hemoglobin is the concentration of 2,3-DPG. This molecule can insert into the pocket between β globin subunits in the 4-chain hemoglobin molecule and reduces oxygen affinity by displacing oxygen.

2,3-DPG is synthesized from intermediate molecules on the metabolism of glucose by means of a pathway known as the Rapoport-Luebering shuttle. 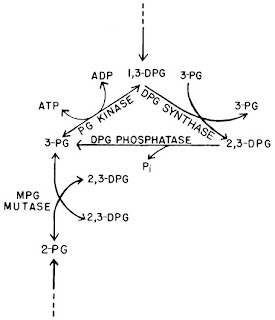 The means by which glucose is broken down to produce energy for the red cell is known as the Embden Meyerhof pathway which is pictured at the beginning of this article. This second drawing is a blow up of the important area. Normally 1,3-DPG is turned into 3-PG by PG kinase (there is a rare type of hereditary anemia that lacks this enzyme) and this generates energy in the form of ATP. The Rapoport-Luebering shuttle is an alternative by-pass that generates more 2,3-DPG. Just how much glycolysis takes place by the main highway and how much takes the by-pass is a complex issue. It depends on the rate of production of its precursor 1,3-DPG, the level of acidity in the cell, how much ATP there is relative to ADP, the ratio of NAD to NADH, and the concentration of inorganic phosphorus.

The most important function of 2,3-DPG is its effect on the oxygen affinity of hemoglobin. In the deoxygenated state, each hemoglobin molecule can bind one molecule of 2,3-DPG, a reaction leading to reduced oxygen affinity and improved oxygen delivery to tissues. The increased oxygen affinity of stored blood is accounted for by reduced levels of 2,3-DPG. Transfusion of such blood results in an increase in oxygen affinity of circulating blood so that less oxygen is delivered to the tissues. It starts to return toward normal in 7 to 12 hours as the function of the pathway breaking down glucose is restored. A noticeable clinical impairment in oxygen delivery due to low 2,3-DPG levels remains disputed in some quarters, but it would be expected to have its greatest impact when large transfusions are required in critically ill individuals.
Posted by Terry Hamblin at 11:30 am

Email ThisBlogThis!Share to TwitterShare to FacebookShare to Pinterest
Labels: anemia

Another factor that should also be considered is the impaired viability of transfused RBCs as compared with "native" RBCs. This, of course, makes little difference in the first several days after a RBC transfusion.

Having had a few transfusions with my CLL I found this interesting. Terry, something I am curious about - can we have too much blood transfused? My last 3 bags left me with a very flushed face/body for several hours after finishing - I looked like a character from a vampire movie! My Hgb was 8.5 at transfusion start and I was an in-patient with query viral infection/cough/flu injection reaction. The transfusion did not take place until 4 days after admission as I was in the 'care' of AAU due to bed shortaqes.

You can certainly be overtransfused but 3 units at an Hb of 8.5 does not sound too much.